A closer look at token compatibility, platform funding and the implications of marketplace contract support.

One major difference between Web2 and Web3 platforms (such as NFT marketplaces) is the funding model: Web2 sustains through ads, data, or premium services (subscriptions). Blockchains and decentralised applications instead rely on fees paid by their users. On Tezos, most NFT marketplaces charge a 2.5% fee that is applied to each sale on the smart contract.

This results in a money flow dynamic that many participants miss out:
All of the platform fees, captured in the final step, need to fund all the preceding steps.

The sale of an NFT and resulting fees can be independent of where this NFT was created, seen, curated or hosted. In fact, each step of the process can execute independently in various interconnected platforms, tools and services. 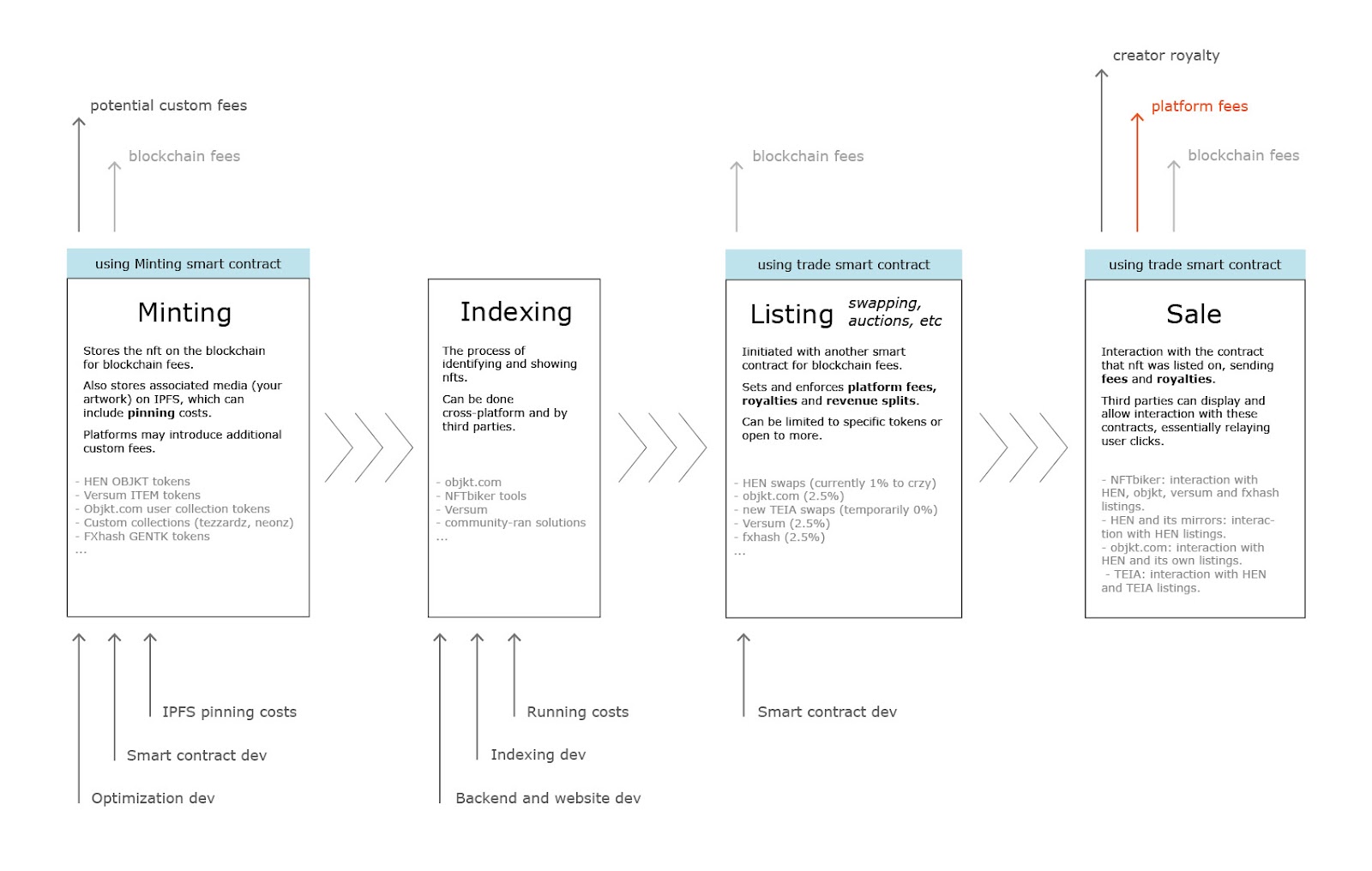 Free choice of many marketplaces is good for users, but it poses a challenge for service providers who typically charge all their fees during the sale step*. This means that only the provider of the listing contract receives the platform fees. This is usually the same platform that the NFT was minted and displayed on, but as Teia gets its own contracts, Versum prepares to index more tokens and Objkt.com being the biggest aggregator of all, it becomes complicated.

Showing (indexing) a token, displaying its listings/swaps, and allowing to create new listings are all different things. In the case of objkt.com for example, the listings from hicetnunc swap contract and objkt.com listings are displayed with no visual distinction, it's seamless. As a result it is considered advantageous to list on hicetnunc because the listings will show up on objkt.com and anything that shows hicetnunc swaps, therefore getting more exposure.

It is therefore the choice of the user creating the listing, on where the fees will go to, and no matter where the trade is executed, it is an interaction with the smart contract that created the listing and set the fees.

If the recent community vote for mutual Teia/objkt.com listings wins in favour of it, it would benefit the convenience of everyone, but users should understand the implications:

In theory this means that both objkt.com and Teia swaps can capture their own fees* independently on where people see and collect them, but people will have a choice upon making a listing on who they want their fees to go to. If people overwhelmingly prefer using one marketplace over another for swaps, the one that's losing attention will miss out on fees and support, even though they might be still preferred and used for all the steps leading up to sales (minting, indexing, UX, browsing, curating, etc), which all have a cost associated with their maintenance and development.

*Teia swaps have currently 0% fees but only temporarily.

At the moment objkt.com shows HEN listings but they do not capture any fees from it, but with upcoming Teia contracts the situation is yet to be decided, hence the vote.

In the case of community made tools such as the ones from NFTbiker, it is important to understand that they only relay the listings from other platforms and don't capture any fees from sales, so any costs associated with running such tools are up to the creator to cover by themselves or possibly through donations.

For independent tools the choice to show different swaps applies in a similar way that it applies to the different marketplaces: Swaps need to be supported by tools too. This means that Teias marketplace action is currently not reflected in a lot of community tools that havent switched to support Teias swaps yet.*

A possible idea proposed by community member denscimonk for the future of Teia is to create a smartcontract or even separate organisation that can direct a certain percentage of fees to tool developers and alternative mirror creators and works towards keeping cerstain contract standards across the OBJKT ecosystem.

*Tool builders that want to include the Teia marketplace swaps for their tools, can find an article on the changes to the indexer on teias Wiki

Why Is it not possible to trade Versum tokens on objkt.com?

Versum does not allow third parties to create new marketplace listings of their tokens (ITEMS), and potentially take fees, without their agreement (enforced by an allowed list on the contract).

However, there are no restrictions on who can display and allow to interact with existing ITEM listings created on versum.xyz, so it is a choice on behalf of objkt.com to not display existing listings, like it does for hicetnunc listings.
Indexing, displaying tokens and their listings is public and unrestricted to anybody in the ecosystem, but making new listings has many implications.

It is a complex situation that is being worked out in a manner that both parties find acceptable.